There is a widely encouraged belief concerning the Middle East, that with Israel as an adversary Islam has once again become famous, but only with America as an enemy can it become great.

Such a belief in world consequence has been brought most starkly into view, not as the logical conclusion of a radicalism evolved from the insurgencies & militant campaigns of the 1970s, but as the caricature of a “clash of civilisations” in the aftermath of the end of the Cold War.

This “clash of civilisations” is in no way congenital to those regions of the Earth concerned, or the people who inhabit them, but is a symptom – INDEED A CONSTRUCT – of the strategic re-orientalising of the East-West dichotomy & the cultural containment of anti-western discourse within the spectre of “radical Islam.”

Born of a programmatic subversion of socialist tendencies in the wake of European colonialism’s defeat in Africa, South Asia & the Middle East (often as a covert instrument of US neocolonialism), “Radical Islam” was manufactured out of disparate localised phenomena to present the appearance of an increasingly world revolutionary project: a project to strategically maintain the tensions of Corporate-State siege mentality after the “failure of world socialism,” by way of a polarisation that in reality presented no effective threat to it.

For whatever may be said of “Radical Islam,” it does not articulate a coherent critique of western capital & makes only a marginal (largely rhetorical) appeal to those of civilisation’s “discontents” dwelling within it: it is rather a hegemonic myth concocted to mask the reality of social relations on all sides (metaphorically speaking, since there are, in fact, no “sides”).

In this respect, it may be more the case that “Radical Islam” will have served to maintain the narrative of Western greatness & prestige in the “war” against an opposing fundamentalism, rather than the contrary, while seeking to mask the turn away from the “liberal democracy” that had for so long been vigilantly maintained as the strategic alibi in counterbalancing “world socialism.”

In this, the “Western powers” have sought to evoke in the region of the Middle East a fundamental “nihilism” against which its own nihilism can be disguised as a necessary strategic turn (“blood for oil”). The reality of this Western nihilism is brought more & more starkly into view with each despotic convulsion of that Ubu parody inhabiting the White House, while the spectre of “Radical Islam” shows itself in actuality to be the strawman of regional satraps engaged in their own neo-colonial expansionism & quasi-genocide (Turkey, Iran, Saudi Arabia, but also Russia & China).

It is for this reason that the social experiment in Rojava presents a disproportionate threat to all vested interests, giving the lie to claims that it is a terrorist state-in-waiting. It holds, instead, a mirror to the many faces of neocolonialism present in the “war against Daesh,” itself a colonial proxy. A mirror to the false moralism & sanctified discourse of sovereignty, legality & human rights, & of emancipation-by-oil-diplomacy. To the fact that the socalled Middle East is not the origin of instability in the current “World Order,” but is in reality that Order’s crucible & its raison d’être. 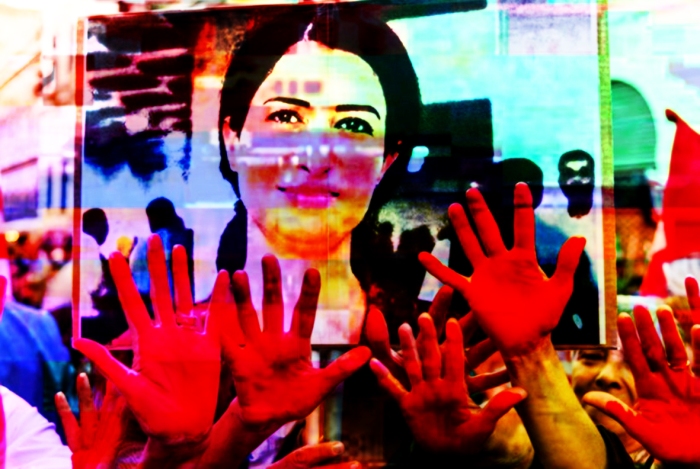