(COVID-19 & THE BANKRUPTCY OF THE CORPORATE-STATE)

To challenge the danger of the coronavirus is surely absurd.

Certainly, we know how easily the spectre of the apocalypse comes out of its box to seize the first cataclysm that comes along, to reﬁlter the imagery of the universal deluge & drag the ploughshare of guilt through the sterile soil of Sodom & Gomorrah. Power has never missed an opportunity to exploit the divine curse.

During the Lisbon earthquake of 1755, the Marquis de Pombal, friend of Voltaire, seized the opportunity to massacre the Jesuits, rebuild the city according to his own radical conceptions & gleefully liquidate his political rivals in a series of proto-Stalinists trial. Pombal, no matter how heinous his acts might have been, shouldn’t be insulted by having his dictatorial coup judged against the miserable efforts that, today, democratic totalitarianism is directing against the worldwide coronavirus epidemic.

What cynicism it is, to blame the deplorable inadequacy of our medical resources for the spread of this scourge! The public good has been compromised for decades – the health sector having payed the price for a policy that promotes financial interests at the expense of citizens’ wellbeing. There is always more money for the banks & fewer & fewer beds & carers for the hospitals. What antics will be used to continue trying to hide the fact, that this catastrophic management of catastrophism is inherent in the system of global financial capital – a system which today, more than ever, must not only be demystified but fought, in the name of Life itself.

Without seeking to contribute to the revival of this idea of divine punishment, which finds its contemporary expression in the theme of Nature ridding itself of Man like some unwelcome & destructive vermin, it is worth remembering that, for millennia, the exploitation of human nature & of terrestrial nature has fostered a dogma of anti-physis, of anti-nature. Eric Postaire’s book, Epidemics of the 21st Century, published in 1997, confirms the disastrous effects of persistent denaturation, which I have been denouncing for decades. Referring to the drama of “mad cow” disease (already foreseen by Rudolf Steiner in 1920), the author recalls that in addition to being helpless in the face of certain diseases, we are aware that “scientiﬁc progress” itself may be their root cause.

In his plea for a responsible approach to epidemics & their treatment, Postaire incriminates what, in his preface to the book, Claude Gudin, calls the “cash drawer philosophy.” Gudin poses the following question: “To subordinate the health of the population to the laws of profit, to the point of transforming herbivorous animals into carnivores, do we not risk producing a fatal disaster for Nature & Humanity?“ Governments, as we know, have already made a show of responding with a unanimous YES. But what does it matter, since the NO of financial interests continues to cynically triumph?

Was it necessary for the coronavirus to demonstrate to even the most stubborn that denaturing, for reasons of profitability, has disastrous consequences for universal health – that which is left to the management of a World Organization whose precious statistics are all there is to compensate for the disappearance of public hospitals? There is an obvious correlation between the coronavirus & the collapse of world capitalism. At the same time, it is no less obvious that what has been allowed to conceal the true character of the present epidemic, is an emotional plague, an hysterical fear, a panic – one which masks the deficiencies of the available treatment & perpetuates the evil by turning the patient insane.

During the great plague epidemics of the past, people did penance & proclaimed their guilt by self-flagellation. Don’t the managers of global dehumanization have an interest in persuading people that there’s no way out of the miserable fate that has befallen them? That they only have the self-flagellation of voluntary servitude? The formidable media machine does nothing but rehash the old lie of a celestial, impenetrable, inescapable decree – in which fiscal psychosis has supplanted the bloodthirsty & capricious Gods of the past.

The unleashing of police barbarism against peaceful demonstrators has amply demonstrated that military law is the only thing that works effectively. Today it confines women, men & children under quarantine. Outside, the coffin; inside, the television: the window open to a closed world! It’s a condition capable of aggravating existential despair by arousing emotions already flayed by anxiety, by exacerbating the blindness of helpless anger.

The coronavirus has become an indicator of state bankruptcy. This is at least a subject of reflection for the victims of forced confinement. After the publication of my Modest Proposals to the Strikers, some friends pointed out to me the real difﬁculty of resorting to a collective refusal (as I had suggested) to pay taxes, levies, tax levies. Yet now, it is the corporate-state itself whose bankruptcy attests to a general economic & social dilapidation – one in which small & medium-sized businesses, local commerce, those on modest incomes, family farmers & even so-called liberal professions, have been reduced – by virtue of the corporate-state’s refusal to pay its dues – to insolvency. The collapse of this Leviathan is more convincing than any political resolution that we must ensure its abolition.

But the coronavirus has done even better. The halt in global production has reduced pollution; it has saved millions of people from an otherwise a scheduled death; nature breathes; dolphins come back to frolic in Sardinia; the canals of Venice, purified from mass tourism, are filled with clear water; the stock markets collapse. Meanwhile Spain resolves to nationalize private hospitals, as if rediscovering the idea of social security; as if the corporate-state had become nostalgic for the welfare state it destroyed.

Nothing can be taken for granted; everything is only beginning. Utopia is still on all fours. Let us abandon, to their celestial inanity, the billions of banknotes & hollow ideas that go around in circles above our heads. The important thing is to “mind our own business” by letting the business bubble implode. We must regain our self-confidence, we must not be afraid of audacity! 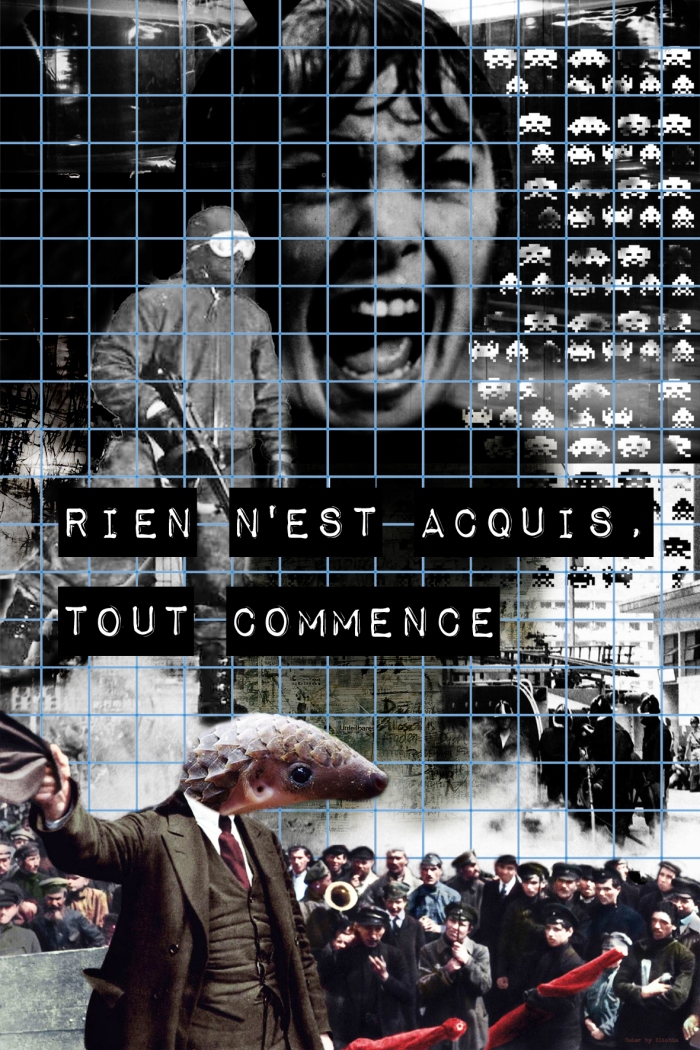